Set in 1916 Ireland the Globe’s current production of Taming of the Shrew, is directed by Caroline Byrne and grounded in language and song. This understanding breathes fresh life into the central relationships, the world of the play and fills the theatre with wonderful music. Working with dramaturg to Morna Regan to frame the action with song was a clever way to engage with the text in a contemporary context. It’s then Aoife Duffin’s performance as Katherina who anchors the show – this song rising to bookend each act and her voice soaring up with a strength that we know will never be silenced.

Often described as a ‘problem’ play due to its seeming acceptance of domestic abuse and misogyny this play is normally updated or tweaked before being presented to a contemporary audience. Are we supposed to find that Petruchio doesn’t feed Kate funny? Is it witty that he won’t let her sleep or wash? It’s clear the text positions this interaction between the newly weds as a game but watching it on a stage is very uncomfortable and actually apart from anything else in this production feels false to his character.

The Petruchio in this version (Edward McLiam) has a whole lot going for him. He has a great beard, great coat, great boots and clearly loves both the idea of Katherina and her feistiness. He wears this quite openly and although he tricks her into a wedding she definitely likes him. No man has ever fought back with wit and strength and responded in kind to her fire – this one does and part of her wants to marry him. The scene where they meet is played out wonderfully – it really feels like a courtship of souls testing each other out.

Which is why I would argue it really doesn’t sit right when he rocks up to the wedding like he does and then proceeds to be horrible to her for ages – like this man as we have met him – would so not do that to that extreme and decay into the disgusting man he does. Petruchio only returns to himself once he puts on his coat again and he drags his new wife back to visit the others. Here, the games are more in actual play rather than downright abusive. I’m really not sure darkening him and the tone so much worked for either developing his character or their relationship – although it does force Kate on a desperate journey. It felt misplaced in contrast to their clear chemistry earlier.

That said when they kiss the entire audience collectively catch their breath at the romance and the interpretation of the speech at the end was great. Having recently studied this in significant depth it was revelatory to see it perform live and consider how other characters reactions (especially Petruchio) shape our understanding of her words. Katherina is no simple woman – she is far more complex and real than us all. Meanwhile while I was sitting there entranced and analysing it my dad was crying – so it hit out on many levels the perfect note.

There were a lot of power shifts that really worked but while I feel there were some beautiful new insights into the central characters, perhaps further interrogation of the midsection of the play might have realised them even more. Perhaps even having them connect too well too early undermined the violence? It’s really interesting that for a production that knocked that last speech by Kate out of the park, the ‘problem’ for me ended up in the middle.

In contrast the rest of the play – the other pair of lovers and the servants are all rather jolly, well performed, endearing and almost incidental. Casting women as the servents worked well and Imogen Doel in particular as Tranio has great fun. Gary Lilburn as Baptista is great as the out of depth patriarch and rival suitor for Bianca, Hortensio is an audience favourite. It is truly a strong ensemble performance. But the drama is where it should be – revolving around the central pair. The ins and outs of how that dynamic plays out is the heart of the play and Caroline Byrne doesn’t step or shy away from that.

Tying everything together all together is the wonderful music – which underscored the play and action beautifully. What is clear (in spite of my reservations) is this production is committed to vision and interpretation and that decision, supported by strong dramaturgical support makes this Taming of the Shrew really sing.

Four Angry Twitter Shakespeare’s for a most excellent experience and production!  Taming of the Shrew is currently playing. You can book tickets here.

Seven Sonnets & A Song is a project to tie in with #Shakespeare400 – where Paul has taken the words of Shakespeare and put them to music. In short it’s a pretty divine collection – it’s only downside that it feels very short – much more like an EP than a record. But it’s beautiful and full of little treasures and new rhythms to words you thought you knew.

Sonnet 18 gets a lovely treatment – but here below is Sonnet 73 – it’s a wonderful video clip:

I missed out on his London concert but sent along a mate who provided me with the goods and also had a great time! Yay for sharing on good things and for tickets not going to waste. 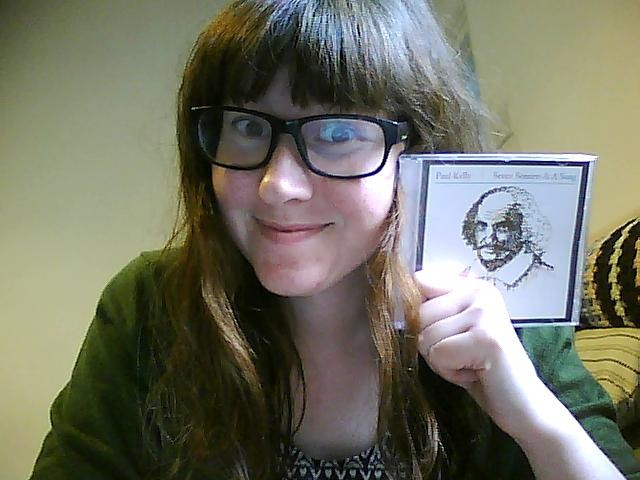 So this isn’t necessarily “Australian” but hearing this very “English” words sung with such a voice is a reminder how much Shakespeare means to all sorts of people around the world and how it can be reclaimed in different contexts.

A discussion for another day perhaps – but for now perhaps lets sit back and enjoy the music.

FIVE SMALL ANGRY TWITTER SHAKESPEARES. It is such a great celebration of an Australian Bard tapping into The English Bard. Plus you can learn and sing these words in a new way, what a truly excellent and worthy thing.

PS. My dad thinks we should write to Paul and get him to sing our Souliloquies! I agree, I think singing them would be ace.